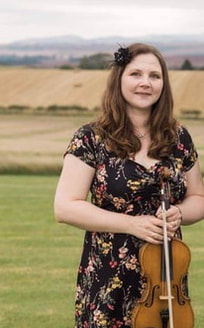 Claire Woodhead
Claire plays bassoon but, confusingly, is shown here holding a violin.  Having spent some years as a peripatetic violin teacher in North Devon, Claire Woodhead retrained as a museum object conservator and now works for the Hampshire Cultural Trust.  Though no longer a career, music has always been a huge part of her life, and Claire has valued playing with the North Devon Strings (aka Choc Chip Cookie Orchestra), North Devon Sinfonia, Lincoln Symphony Orchestra, Lincoln Pro-Musica and Southern Camerata.  Having originally joined WCO in 2008 as leader of the viola section, she took a two-year break to study for a Masters, returning in 2015 to spend some time section hopping before taking on the role of orchestra leader in September 2016.  Asked to pick a favourite between violin and viola, the answer is generally whichever she is holding at the time.

She began playing bassoon in 2018 and handed over leadership of the orchestra to Sarah Noble in 2021 so that she could enjoy a new career in the woodwind section.
​
Claire enjoys playing with several chamber groups locally and currently also performs with Wessex Sinfonietta, Winchester Camerata, and the Haydn Collective.